Love triangle reportedly caused the death of a man at the hands of his rival, who buried his remains at a vacant lot in Barangay Mansilingan, Bacolod City, yesterday.

Bonilla said they arrested the suspect he identified as Wilfredo Sadaba, 73, of Carmenville Subdivision in Brgy. Mansilingan after a brief chase.

Sadaba told the police that his former lover, Virginia Canonoy, 41, of Jaime Street in the barangay and was the live-in partner of the victim, went to his place to ask for some malunggay leaves.

He said that a few moments later, Casas arrived, quarreled with him, and tried to hit him with a piece of wood.

Sadaba added that he retaliated and hit Casas with the wood he had wrested from him, and later hacked him with a cane cutter.

Sadaba then covered his body with leaves and twigs before fleeing, police investigation showed.

Sadaba claimed that Casas had threatened to kill him before.

Canonoy said she had a relationship with Sadaba before she lived with Casas for six years, with whom she has a child. But they had already parted ways, she said.

The victim’s relatives said they are willing to file charges against Sadaba, whom they claimed was the other man in Canonoy’s life.

They claimed that Casas was the live-in partner of Canonoy before Sadaba, and not the other way around, and there is a possibility that she helped the suspect in trying to conceal the crime.

Casas reportedly got mad when he learned that Cananoy was seeing Sadaba.

Meanwhile, about P63,000 worth of suspected shabu was seized by the Bacolod Police in their buy-bust operations in barangays 27 and 3 Wednesday and Tuesday.

P/Lt. Libery Indiape, spokesperson of the BCPO, said that Gabby Alob, 27, of Purok Star Apple in Brgy. 27, was arrested at about 1:45 a.m. Wednesday after transacting with a police poseur buyer.

Six heat-sealed transparent plastic sachets of suspected shabu, weighing five grams and valued at P34,000, were recovered from Alob when he was arrested.

Mary Grace Avancena, 29, and Rodney Divinagracia, 27, both of Purok Cereza South, Brgy. 3, were arrested at about 10:45 pm Tuesday in the purok, after one of them allegedly sold illegal drugs. The police seized 12 sachets of suspected shabu, weighing six grams and worth P30,000, from Avancena.* 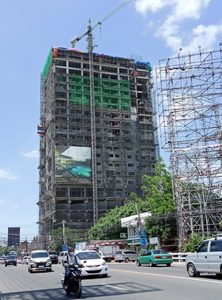