BY GILBERT P. BAYORAN Provincial Administrator Rayfrando Diaz confirmed yesterday that a Capitol department head, who is the officer-in-charge of the Provincial Budget Office, tested positive for COVID-19.           Diaz, however, said the officemates of the OIC, who were immediately

Is Biblical history repeating itself in the Philippines? The massive floods in Cagayan and Isabela provinces seem to indicate so. I am sure I am not the only  person who got reminded of the story of Noah and his

The Department of Agriculture virtually launched last week the Cash and Food Subsidy for Marginal Farmers and Fisherfolk program with a P4.5 billion allocation.           The program aims to provide direct food and financial assistance, worth P5,000, to eligible

I am hopeful that the Negrense community will continue to support the local media by not just with clicks and likes, but also through the actual buys and purchases that will keep these endangered businesses running so they can provide

Health workers to get aid

Local government chief executives in Negros Island have expressed their strong support to the strengthening of the National Task Force to End Local Communist Armed Conflict (NTF-ELCAC), and endorsed the approval of development projects, worth P19 billion, for insurgency-cleared barangays.

The estimated damage brought by Typhoon Ulysses to infrastructure in eight heavily affected regions is now P8 billion, the Department of Public Works and Highways (DPWH) reported yesterday.           The department said damage to infrastructures occurred in the Cordillera Administrative

The Bacolod Sangguniang Panlungsod is urging government employees and residents to consider buying local products, visiting local destinations, and dining in local cafés and restaurants to help in the recovery of the tourism industry of the city.           The resolution,

Gordon Hayward has agreed to a 4-year, $120-million deal to join the Charlotte Hornets, according to an ESPN report Saturday.             The monster deal punctuates a busy week for Charlotte, which drafted point guard LaMelo Ball at No. 3

A plug for Aunt Jemima

If you have been following on TV events in the United States, you, like me, will be likely to conclude that it is not Joe Biden who will beat Donald Trump in the elections in November. No, not Biden, nor any other possible candidate, but he himself will bring on his doom. How? because of the dissatisfaction of his people on the way he has been responding to the pandemic that has apparently hit his country worse than any other major ones in the world. Have you ever noted, how he has barely been quoted on the subject, despite the fatality rate his country has marked up? 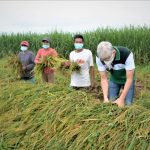 The inter-cropping of sugarcane and rice in Hinigaran town, the pilot area in Negros Occidental, yielded its first harvest in three months.